BfN are committed to amplifying the pregnancy, birth, breastfeeding and motherhood experiences of black women. Today we are grateful to Dr Ernestine Gheyoh Ndzi of York St John University, who has willingly shared her experience of giving birth in the UK.

(A warning – her story below is very personal and harrowing to read, but sadly not unique.)

We know that black women are five times more likely to die as a result of complications in their pregnancy than white women. In November 2018, commenting on the MBRRACE-UK report which published this shocking statistic (https://www.npeu.ox.ac.uk/mbrrace-uk/reports). We said this was unacceptable and required urgent action, and today our view has not changed, except clearly more needs to be done to tackle this.

Importantly, as Ernestine’s story testifies, we need to work harder at removing the culture of silence that protects racists and allows racist behaviour (both blatant and unconscious) to play out in health and social care systems. ​

As a breastfeeding charity we are focused on our own role in this and we are committed to listening, learning and taking bold action to challenge racism. We are committed to using our platforms to amplify black mother’s voices, so that suffering and bad treatment doesn’t stay hidden behind silence.

By sharing the experiences of mothers from black and minority ethnic communities, where they are willing for their stories to be shared, we hope to be able to highlight to policy influencers where the focus for change needs to be. 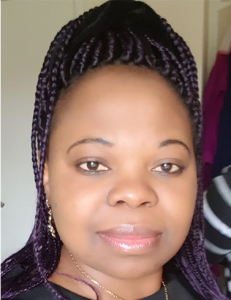 My name is Ernestine Gheyoh Ndzi, a black woman resident here in the UK and a mother of two beautiful girls. The killing of George Floyd simply because he is black and many others that lost their lives prematurely for the same reason calls for serious action from all especially black people like me.

There are many that have been killed or have suffered severe racism but have not spoken up. Today, I choose to speak up about some of my nasty experiences of racism. My account will be centred around my experience of childbirth and breastfeeding.

A report published by the Mother and Babies: Reducing Risk through Audits and Confidential Enquiries across the UK (MBRRACE-UK) published in 2018 stated that black women in the UK were five times more likely to die in childbirth than white women. Why is this the case?

Reports suggest that being black and pregnant carries more risk. Assuming that is the case, the deaths are facilitated by racist behaviour. Racism makes the doctors and midwives not pay attention to black women, and black mothers are less likely to speak up if they fear they won’t be taken seriously.

The reason for my account is to raise awareness and encourage more black women to speak out because we can’t allow such nasty treatment to continue.

I had a very difficult pregnancy with my youngest daughter resulting from complications I developed when I had my first daughter. Many times, I was rushed to the hospital in an ambulance. In addition, I was constantly bullied and harassed by a group of teenage girls that went to a school close to where I lived. They called me names such as ‘fat’, ‘monkey’ and shouted at me to leave their country. Most of the time I avoided them and paid no attention to them. Part of the reason for my silence was because I knew that discrimination against blacks was rampant, and they were not the first to rain racist comments on me. Sometimes, I felt like I should not have come to the UK because of the hateful comments.

However, my health issues worsened with time. I was advised by the doctors to have a caesarean section at 36 weeks, but I refused because I wanted to carry the pregnancy to full term. At 38 weeks, I had my baby through caesarean section. I told the doctors that my body takes a long time to recover from an anaesthesia such as epidural (based on the experience with my first daughter). The C-section was done in the morning and by 16:00 a midwife came to tell me that I would be discharged that evening. I said that would not be possible because my legs were still numb.

By 18:00, a midwife came and asked if I had showered. I said no, because I still could not feel my legs. She became stroppy with me, saying I should have got out of bed and showered. I was shocked and surprised but did not respond because I was feeling exhausted and rather too emotional to answer. Many thoughts ran through my mind as to why she would speak to me like that. She left and returned with a bowl of water to assist me, but all she did was pull and push and grumbled to herself. I cried but had no voice to speak out because I did not think anyone would listen.

Each time the baby cried at night, I had to call a midwife to hand the baby to me to feed. No one spoke to me about breastfeeding or even asked if I needed any help. Unfortunately for me, my baby cried a lot that night. I got too scared to continue ringing the bell rather, I used the side of the bed to pull myself closer to the baby’s cot. When a midwife came in at 4:00am doing their rounds, she shouted at me for lying down on the bed with the baby. I tried to explain that I was feeding the baby, but she gave me no opportunity to speak. She took the baby back to her cot and left.

I felt less of a human, less of a mother and worthless. I cried but felt my tears were not helping me either because it gave me a headache. By 6:00am, I was on the phone asking my husband to come in, but unfortunately, he couldn’t because he needed to drop my first daughter off at school at 8:45am before coming to the hospital. At that time, I could feel little movement in my legs, but there were still very heavy. I literally had to drag them on the floor.

When my husband arrived by 9:30, the doctors came in and told me that I would be discharged as soon as the paediatrician had checked the baby. They completely ignored the fact that I was very tired, hadn’t really recovered from the anaesthesia and still had abdominal pain. The paediatrician checked the baby and said although she hadn’t opened her bowels yet, we could still go home and I should call the GP if the baby didn’t by the following day. We eventually left the hospital late afternoon that day.

When I got home, my abdominal pain got worst, my legs were still heavy, the baby was not latching on very well, my nipples were so sore already and the baby was crying a lot. When it got to about 20:00, the abdominal pain was unbearable. I was helpless on the floor with the baby screaming and my husband struggling to manage the situation. I refused to ring 999 because of the experience at the hospital.

We rang 111 instead and requested a doctor come out to me, because I couldn’t bear to go back to the hospital and re-live the previous night’s experience. The lady that answered the 111 call was concerned that I had a C-section the previous day and was home already with all the pain. However, after the initial questioning, it took 3 hours for a 111 doctor to call me back. She asked questions and told me she was on her way from about midnight, the doctor only got to me by 4:00am. She stood about 3 meters away from me and said she was in a rush to get somewhere. She asked me to bring a urine sample, which she only looked at and said, ‘Yes, there is blood in your urine, I will give you antibiotics’. I thought, of course there will be blood in my urine, I just had a baby. She gave me antibiotics and some pain killers and left. I took the medication and spent most of the time crying and wishing someone could just be a little supportive.

The midwife visited the following day and asked me how I was doing. I explained that I was struggling with the abdominal pain and breastfeeding. All she said was, call the GP if the pain isn’t subsiding and go to a baby group for breastfeeding support. She spent 10mins with me and left. 4 hours later, the health visitor arrived, checked the baby and asked me to take the baby to a nearby baby centre after a week for checks. That was all, she did not return. I sank into depression, but was unable to tell anyone what I was going through. I could not explain to my husband how I was feeling because I thought he had too much to deal with caring for us, and my other daughter.

The baby centre and baby groups were hugely unhelpful. When I walked through the door, I could feel all eyes on me. I was the only black woman in there. Rather than just having normal conversations, they start with questions like ‘which country do you come from?’, ‘how long have you been in the UK?’ I interpreted the questions as why are you here? This made it all the more difficult for me to ask for any help or want to go to a baby group. It took me well over eight weeks for the abdominal pain to subside and well over 6 months to start to feel like a human being again. I am fortunate to be here and to tell my story but others have not been that fortunate.

When I share my story with other black women and listen to their stories, I feel like mine was minor, but trust me it wasn’t. It breaks my heart because the pain black women go through is completely unnecessary. We have done nothing wrong being blacks.

Racism is deeply rooted in our society and even more difficult to call out because most acts are subtle. Generally, a woman pre and post childbirth, is overwhelmed with hormones and requires support. Postnatal depression is on the rise because of the hormones and the lack of support.

This is worse in black women because of the added racism. It will take the UK government and society a lot to get black women and men to trust them. My encouragement to black mothers is to speak up, because by doing so someone could help.

Do not be like me and deal with it on your own.