On 15th May the All Party Parliamentary Group on Obesity launched its report on the current landscape of obesity services. 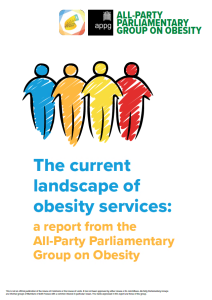 ‘With overweight and obesity costs in the UK estimated to be at least 27 billion every year and recent headline news that obesity is poised to overtake smoking as a key cause of cancer it is no wonder that national leaders are championing for change’, said Shereen Fisher, CEO of Breastfeeding Network who attended the event in Parliament.

She said, ‘We agree with the report’s key recommendation that “A national obesity strategy for both adult and childhood obesity should be developed and implemented by the Government, with input from key stakeholders. This should look to strengthen existing services and replicate best practice across the country. However we were disappointed to see there is no mention of how babies are fed anywhere in the report despite recognising “One in five children are already overweight or obese before they start school”’.

There is a wealth of evidence about the importance of breastfeeding, support for responsive bottle feeding and timing of starting solid food and the difference this can make to both child and maternal obesity levels.

The Obesity report recognises that: “There needs to be a co-ordinated, whole-system approach to the prevention of obesity at both the local and national level considering the impact of the environments in which people live, including the total household income, as well as the amount and type of food they consume.” and so there is clearly understanding that how infants and children are fed has both an immediate and long term effect on their health.
With the role of the Obesity APPG being to consider prevention through to treatment for obesity it is vital that the evidence for nutrition and the role that breastfeeding plays is considered and understood. The long awaited SACN (Scientific Advisory Committee on Nutrition) draft report ‘Feeding in the First Year of Life’ will provide important review of the evidence affecting nutrition useful for the work of the APPG on Obesity.

Last year the Government published its childhood obesity strategy. The top line in this was the soft drinks industry levy. The Breastfeeding Network would like to see the Government go further in taking action to implement the recommendations of the Obesity APPG AND include evidence and support for breastfeeding which will go a long way to support better health outcomes for women and children regardless of their backgrounds.

‘With the effects of obesity disproportionately centred on poorer children and families the important role of breastfeeding, which offers the same health and emotional benefits to all babies regardless of background, needs important attention in any future obesity strategy that cares about narrowing inequalities‘ says Shereen.

While focus on the problem of pervasive junk food advertising at children and families is important we must not ignore the role of early years nutrition from pregnancy and beyond. As a recent tweet said ‘…the problem of obesity begins long before a child is able to eat crisps’.