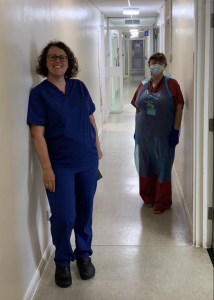 Zoe Chadderton is a midwife and Breastfeeding Co-ordinator at a central London hospital, and a BfN Supporter, Supervisor, Tutor and Director. This is her account of working on the frontline.

I had a week of annual leave booked in early March and at that point we knew services were about to change dramatically. I spent my week of ‘leave’ writing plans and guides for staff and for mums.

Nationwide lockdown began on the 23rd March and immediately things changed, both on the wards and out in the community.

In normal times mums in our area can access breastfeeding support at peer support run drop in groups, and also through referral only groups at children’s centres, usually run by community infant feeding midwives. However, from 23rd March all face to face peer support stopped with immediate effect.

Carla and Lisa at the local BfN support project in Lambeth set up Zoom support sessions straight away and they have been a godsend for local families.

We had to try and form a service that would support women both in hospital and out in the community. We initially thought we would  have a larger team, but that didn’t work out for various reasons, so that meant we had reduced provision.

All the community midwives moved into Community Hubs – the hubs had to be based in centres that were in some way linked to our hospital. This made location a bit tricky, but fortunately they were reasonably well spaced out geographically across the borough.

Our work load became very high, so we moved to 10 hour days. The initial plan to work alongside out Health Visitor colleagues didn’t materialise, but we have managed to maintain digital contact with them.

We seem to be seeing all of the mums that need our support, and alongside the Zoom sessions from the BfN peer supporters, we are offering a good service.  Mums were happy to come to their appointments and the midwives wore a face mask, goggles, gloves and an apron to meet with them.

I was lucky because the hub I was in was a bit more spacious, so I didn’t have to wear the full kit all the time as I could be two metres away if we were just having a chat. Other midwives weren’t so lucky as there was less space available for their appointments.

Another issue was that the centre turned their heating off at the end of March, meaning it was so cold that we had to ask mums to move to other hubs for their appointments. Eventually the centre turned the heating back on – only for a heatwave to hit – we then had the heating on all the way through until May – throughout the hottest April on record!

Easter weekend was the peak pressure point for us – that was the time when the most staff were off – either with Covid symptoms, or self isolating or recovering from illness. Fairly soon after that we found that things calmed down a bit for us – as we’re based in Central London, many of our mums left London – either to return to their home countries – France, Spain, Italy etc – or to other parts of the UK to be with family.

So in the maternity unit we were actually less busy for a while – we imagined that other hospitals across the UK were getting busier and we thanked our lucky stars that we were midwives and not general nurses.

One of the unexpected outcomes of no visitors being allowed on the Postnatal ward (unless baby was seriously ill in NICU) is that women drew their curtains back, chatted to each other, exchanged phone numbers, and there was less stress about family coming to visit or partners staying overnight. They missed their partners, but most coped really well.

We are fortunate that we already have high breastfeeding rates in our area, so it’s difficult to know whether lockdown has made a difference to this. But we did get a feeling that more mums felt even more determined to breastfeed – the stories in the media about a shortage of formula might have contributed to this.

We did initially see a significant increase % weight loss in babies in the early days.  This is getting better now – it may have been down to changes in the services we were providing.

We are surveying families now to get feedback on how they felt they were supported and it will be interesting to see the results – and whether any long lasting changes come out of this situation.

Overall I feel like things didn’t get as bad as we thought they might do for us – tongue tie services continued as normal, we were able to offer some breastfeeding support, we did see some women with Covid 19 and some mums with heightened anxiety, but in the main we were dealing with healthy women.

Hopefully we are through the worst of it now, but we are still at capacity. We’re being as flexible as we can be and over the next four weeks things may be busier as staff start to use annual leave up – but I’m confident we can cope.

On behalf of BfN and all of the families that you have supported – thank you Zoe!