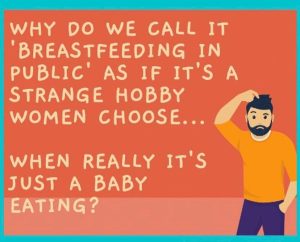 If you live in the UK, seeing somebody breastfeed when you’re out and about may not be an everyday occurrence (unless you’re hanging out at baby massage, breastfeeding groups or soft play), even though it’s protected by law.

But with almost 700,000 babies born each year in the UK, that’s a lot of little people needing to eat.  Did you know that when a baby is born, it’s tummy is literally the size of a marble (and not the big type of marble!). What this means is that whilst you could go without eating and drinking for a good few hours at a time (although it turns out that adults like to eat and drink frequently too), babies need to eat a small amount really often.

Getting to grips with breastfeeding is also a skill that mother and baby learn together so it can take time, and it may feel to parents like they do little else in the early weeks.  For the first six months of their life, babies only need to eat breastmilk (from their mum or donor human milk) or infant formula. If babies are breastfed, feeding should be frequent to establish and maintain the milk supply; if feeds are skipped or delayed, then the mum’s milk supply will drop. Parents are also told by the NHS to watch out for the early signs of hunger, like rooting (opening their mouth and moving their head from side to side), opening their mouth and making sucking sounds, and to offer the baby a feed when they notice them. If these early signs don’t result in a feed, babies will move on to sucking their fingers or fist or getting restless.

So, what this combination of things means is that every time a parent needs to leave their house with their baby, there’s a reasonable chance that they might need to feed them. Breastfeeding is also a bit of a cure-all when you have a child that’s feeling upset and might be about to do some very loud crying, whilst you’re still part way through the errand or activity you’re at.

The reasons I’m telling you this, is because we recently looked at all of the research on people’s views and experiences of infants being breastfed in public spaces. Many people didn’t understand that babies need to feed often, or that mothers respond to their child’s cues to decide when to feed them; the babies are running the show, with the parents as the caretakers carefully protecting their offspring.

If any of what I’ve said is new knowledge for you, you are not alone; many members of the public didn’t know what was normal for babies in relation to feeding. For example, some of them incorrectly thought that mothers breastfed their babies for their convenience, to make a point, or even because they wanted to “flash” at strangers. None of these could be further from the truth!

A small number of mothers reported that they’d never had any issues breastfeeding their babies outside of the home, which is great and a sign that knowledge and attitudes are becoming more positive. However, many mothers reported feeling worried about negative reactions  when they were feeding their baby away from home; some mothers reported being stared at, tutted at or even rude comments being made about them or to them from strangers.

Mums who were young, in bigger bodies, from poorer areas or ethnic minority groups found this even harder. These reactions from strangers affected mothers so much that many reported that it made them feel: uncomfortable, self-conscious, embarrassed, exposed, ashamed, worried or anxious. I don’t know about you, but none of those feelings sound pleasant, so clearly, the mums were prioritising their infants’ nutrition needs over their own comfort and not “flashing” at strangers.

In the context of it being unpleasant or anxiety inducing to breastfeed outside the home, mothers had three options:

For mums who were “doing it anyway”, things sometimes felt easier after a while, when they had not had negative experiences from strangers whilst their baby was feeding.

So, what can you do, as a member of the public, to make sure you aren’t accidentally making mothers feel bad when their baby is eating?

Also, if you’re out and about with a friend or family member
who is breastfeeding, you can support them by:

Thank you to Dr Aimee Grant & Prof Amy Brown for writing this article for the Breastfeeding Network, it’s great to share with our readers what they can do to support people feeding their babies while out and about.