Every day hundreds of babies are being breastfed outside the home – it is a bit like being pregnant, you don’t notice that anyone else is until it happens to you and then suddenly it seems like everyone is expecting a baby! 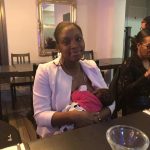 So even though babies are feeding when out and about, most of the time we just don’t notice and neither does anyone else. And even when they do realise  most people rarely comment.

If someone stares at you it doesn’t mean they disapprove. We heard from one mum who was feeding her baby and an elderly couple were watching her. When they got up and began making their way over to her she wondered what they were going to say. It was only to comment on how lovely it was to see a breastfeeding baby. The women had breastfed her own children and it had brought back fond memories.

But, sadly, very rarely, someone, somewhere decides to make a fuss, which may get a lot of publicity and make mothers think that it happens all the time. This just isn’t the case – babies are being fed out and about everyday but we don’t see them all in the newspaper so we know that, almost all of the time, breastfeeding goes on without any fuss or bother at all.

If you have been unlucky enough to have someone make you feel uncomfortable or they have tried to stop you feeding your baby then it can be useful to know what your rights are.

In England and Wales the Equality Act states that it is sex discrimination to treat a woman unfavourably because she is breastfeeding.

In Scotland breastfeeding is protected by the Breastfeeding etc. (Scotland) Act 2005 under which it is an offence to stop someone in a public place from feeding their child, if under two, with milk. The legislation allows for fines for preventing breastfeeding in public places.

The NHS have a webpage about breastfeeding in public, which includes video’s and useful suggestions.

The Equality Act 2010 is the law which bans unfair treatment and helps achieve equal opportunities in the workplace and in wider society.

The Breastfeeding etc (Scotland)Act 2005 gives the letter of the law.

Maternity Action (a national charity working to end inequality) have an information sheet available to download on Breastfeeding in public places.

It may also be useful to contact the Government equalities office if you have been unfairly treated.

External websites also have some ideas and tips on Breastfeeding in Public: